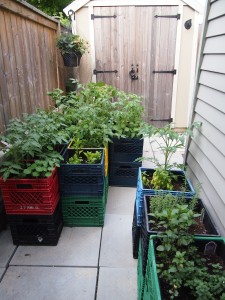 We started growing edible crops in old milk crates in April. The idea came from the Bowery Project, which we stumbled upon at the Green Living Show. What was once a generous garden at the back of the Tiny House is now paved. Crates are the perfect way to resurrect the garden without having to remove several square metres of flagstones and concrete.

We bought the crates on Kijiji: twenty-four to begin with, rapidly followed by another two dozen when we realized just how many plants two garden-deprived former apartment-dwellers had bought, and also just how much we loved our colourful cubes (Bowery Project’s were all black; we deliberately chose multi-coloured). We currently have two colonies: a corner of the concrete parking pad houses mostly hot peppers – cayenne, jalapeño and one of the world’s hottest, a chocolate-7-pot chilli pepper – and the flagstones outside the kitchen now support bell peppers, tomatoes, an assortment of herbs, green onions, nasturtiums (mainly for aesthetic reasons, but also edible), arugula and a raspberry plant.

The crates are easy to prepare (see pictures below), drain well, and are easy to move into better light (should the need arise, they would also make it easy to isolate diseased plants). They hold a lot of soil; each crate is a cubic foot and we needed eight 60.5-litre bags of potting mix to fill twenty-four planter crates (the other twenty-four act as bases, creating raised beds). Landscape cloth works well as a liner, but any other permeable, flexible material would do. In some of our crates we used fabric we had salvaged from the underside of an old box spring.

We created the crate garden mostly to please ourselves: we wanted better quality and better value produce than we typically find in shops. Since our plants have flowered, we’ve also been delighted to notice how attractive they are to bees. In Ontario, as elsewhere, bee populations are in decline; we didn’t set out to save them, but we’re thrilled to be contributing, in a Tiny way, to what we hope will be their revival.

1. Cut out the liner (fabric shown was the base cloth of an unwanted box spring).

3. We used a staple gun to secure the liner to the crate.

4. We combined two- and three-crate stacks to add visual interest.

13 thoughts on “The great crate garden”